What is a Challenge Coin?

What is a Challenge Coin? 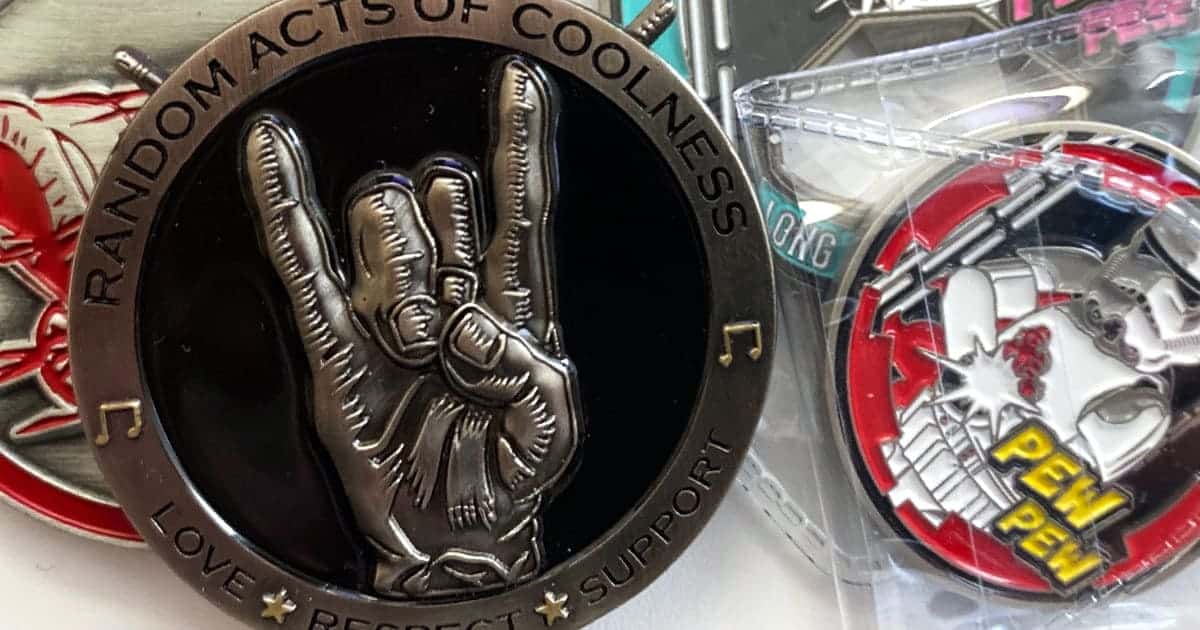 Learn About Challenge Coins and Their History

A man walks into a Saigon bar…and pulls out a strange coin, which he taps on the bar to get the attention of everyone around him. “Coin check!” he yells.

Immediately several people around the room go for their pockets and pull out similar coins. One pats himself down hunting for his, then sheepishly informs the bartender the next round is on him when he can’t find it.

This is an example of the now-uncommon “challenge,” and the coin called a challenge coin. It’s a military tradition that has expanded dramatically since its beginnings, and challenge coins are now available for everything from orchestras to Presidents. But the coin’s genesis was from the American military.

The Murky Origins of Challenge Coins

Challenge coins are so common now that they’re being issued by civilian organizations, but though there are many stories of where they came from, it’s clear they were military.

These small medals were designed to fit in a pocket as a token of identity. They aren’t an officially-sanctioned part of the U.S. military, but they are one of the most common traditions. And even though they are called  “coins”, quite often a token or medal and not an actual coin may be used as the actual host “coin.” Historically, some believe that the challenge coin idea came from the Roman legions that conquered much of what was the ‘known world’ many centuries ago. Legion commanders would give soldiers captured coins as a way of thanking them for their bravery in battle. Oftentimes these coins spent. Later, coins would be stamped with special symbols to identify members who served in the same platoon or division or who fought in a specific battle or campaign. Some say the origin came from World War I, when a lieutenant commissioned bronze coins for his unit. A fighter pilot was captured and escaped, and when he reached a French outpost, they assumed he was a spy. Before he was shot, he showed them the coin, which he had kept in a pouch around his neck that had not been touched when the Germans stripped him of identification. The coin saved his life.

Some historians think it came from a Vietnamese bar that used enemy bullets, or challenge coins, as a password for entry. Some trace it to the 11th Special Forces Group in the 1960s, where one member stamped old coins with an emblem and presented them to other unit members. Others trace it back to the Boer War. There were a few units, including the 10th Special Forces Group, that had their coin traditions. Still, it’s universally agreed upon that the mid-1980s was when the challenge coin tradition took on a life of its own in the American military. It went from a niche tradition to something that just about every unit takes part in today. Today, due to low costs and quick production methods, unit-specific challenge coins are usually base metal medals that display a military unit’s insignia or display a specific battle or military action in which the group took part.

The coin itself has been a few things throughout its life, including possibly local coins of a specific type and denomination used for identification. But the general form today is a small medallion with a symbol of the person or organization that issued and presented it.

How Challenge Coins are Used

That tradition is less common than it used to be, and often if it’s referenced today, it’s loose enough that the round of drinks isn’t insisted on. Challenge coins are often used for display today, and some aren’t even in the form of coins. Traditionally a coin is palmed from the giver to the recipient in a handshake. The recipient doesn’t look down at the coin. Instead, they make direct eye contact with the person who gave it to them.

The older challenge traditions aren’t as common as they used to be. Though challenge rituals vary from unit to unit in the military, many coins are now just displayed or collected.

Military members (particularly field rank officers) often have a personal challenge coin to give out. This goes all the way up to the highest ranks. Congress has challenge coins, as does the President. Civilian organizations will mint their own, too. Director of Iron Man 2 Jon Favreau gave custom challenge coins to military members at Edwards Air Force Base that helped with the creation of the movie, in a show of respect for a tradition he was the recipient of a few times himself during the filming.

Most modern service members amass a small collection of challenge coins during their time in military service. Some collect them. This is much more common among active and retired service members than it is among the general public. Still, collectors of exonumia (tokens and medals) may be interested in challenge coins to round out their selection.

Challenge coins are still much more common among military members than civilians, but this may change as collectors learn about this unique tradition. For anything numismatic, including exonumia, follow APMEX. We’ll help you source the unique and interesting coins you’re looking for.