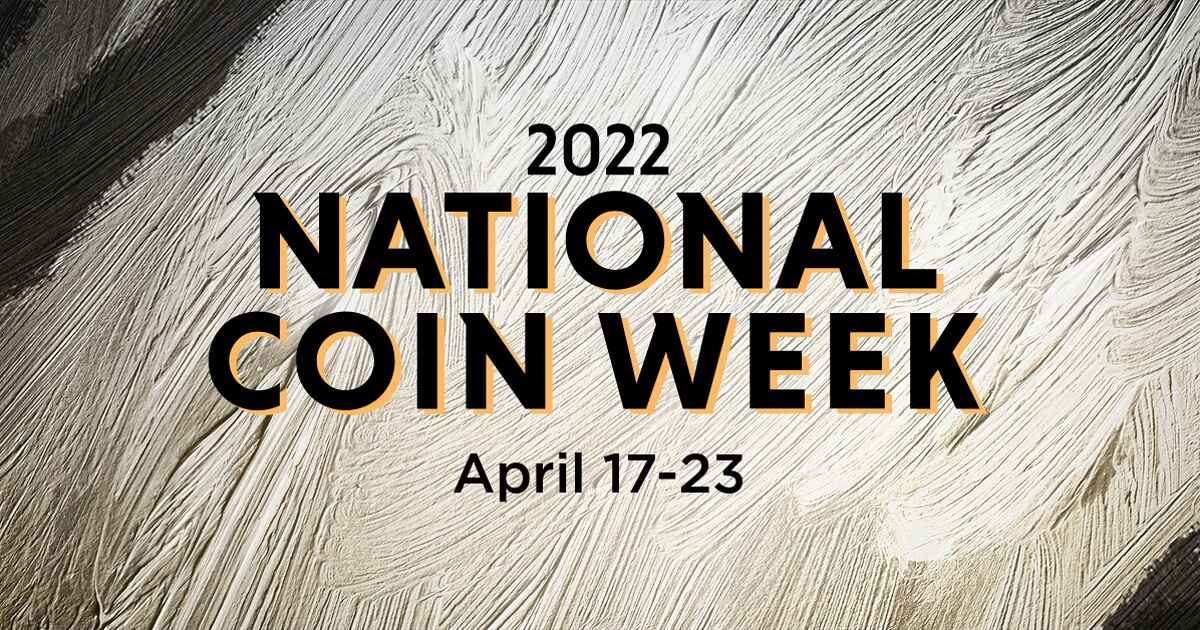 On April 17 – 23, 2022, we will celebrate National Coin Week (NCW). National Coin Week is sponsored by the American Numismatic Association (ANA), the largest association of coin collectors, investors, and dealers, with nearly 25,000 members worldwide. The purpose of the ANA is “to advance the knowledge of numismatics (the study of coins and currency) along educational, historical, and scientific lines and enhance interest in the hobby.” The ANA was founded in 1891 and was federally chartered in 1912.

The idea of a National Coin Week was created in 1923 when coin dealer and ANA Board of Governors member Julius Guttag put forth the idea of a week-long celebration to “attract the general public to our hobby and consequently increase our membership and aid in our science.”

The ANA wanted its members to conduct lectures about coins and their history. They also suggested local coin clubs involve themselves in the activities, plan exhibits and provide lecturers with a platform from which they could share numismatic knowledge. Museums were also encouraged to display their coin collections, which were not often featured publicly.

The ANA’s monthly magazine, The Numismatist first released in 1889, first mentioned National Coin Week in the December 1923 issue. The plan was to celebrate the first NCW during the week of February 9-16, 1924. The original founders wanted NCW to coincide with the anniversary of the birth of Abraham Lincoln. Between 1924 and 1941, NCW was celebrated during the week of the anniversary of the birth of Lincoln. Then in 1942, the celebration of NCW was moved to the third week of April, where it has remained ever since.

Continuing with this very proud tradition, the ANA has declared April 17-23, 2022, as National Coin Week. The theme of this year’s celebration is “Dynamic Designs, Artistic Masterpieces,” which celebrates not only the beautiful and historic coins that our nation has produced but also the great coin designers throughout our nation’s history.

Our first national mint was founded during the administration of President George Washington in 1792 and, since then, there have been numerous great coin designers who worked for the Mint creating the designs that adorned our earliest coinage to coinage of today.

As designs gain public acceptance and the coins are in commerce, year after year, it becomes a natural fact that the US Mint engravers and designers’ creativity can become stale. Year after year, these designers place similar allegorical representations of Miss Liberty on the obverse (front) of the coin and an eagle or wreath on the reverse (back). There were periods in our history where designs changed slightly, or not at all, for decades. But by the turn of the 20th Century, President Teddy Roosevelt had enough, and he was truly responsible for giving our coinage the facelift it needed.

In 1904, President Roosevelt wrote to Secretary of the Treasury Leslie Shaw and described US coinage in this manner: “I think our coinage is artistically of atrocious hideousness.” But Roosevelt had a plan – he wanted to raise the artistic level of our coinage designs to rival the aesthetically beautiful coins of the Greeks and Romans. Fortunately, Roosevelt had a good friend in one of the greatest American sculptors of his age – Augustus Saint-Gaudens. He was truly a gifted designer who had created a medal for Roosevelt’s second inauguration that truly inspired Roosevelt to move forward.

American coinage designs are normally changed only through an Act of Congress, but coin designs may be changed by the Treasury if the design has been unchanged for a minimum of 25 years. In 1906, our Ten Dollar and Twenty Dollar Gold coins were two coins that met such a requirement. Roosevelt engaged Saint-Gaudens to design new coinage that would befit the pride and beauty of our nation’s heritage. Saint-Gaudens quickly designed new coinage for both denominations and the designs have been ensconced in the pantheons of coin design ever since. In fact, the Twenty Dollar Gold coin is universally known as the “Saint-Gaudens’ Gold Double Eagle.” Tragically, Saint-Gaudens lost his battle with cancer in 1907, the first year of striking for both of his new designs. The coins have been acclaimed as the finest American coins ever designed. Roosevelt wrote to Saint-Gaudens’ widow telling her that her husband’s last coin designs were “more beautiful than any coins since the days of the Greeks, and they achieve their striking beauty because Saint-Gaudens not only possessed a perfect mastery in the physical address of his craft, but also a daring and original imagination.”

This is an important story, but it is only of one great American coin designer. There are very many others who have created our historically important coins designs from 1793 to today. APMEX will bring you a number of these stories.

There have been numerous coin designers, both U.S. Mint employees and talented outside artists, who have created the numerous “masterpieces in miniature” that we celebrate during this 2022 National Coin Week. APMEX will feature the history of these designers and the fantastic coins they created, as well as the history behind the coins themselves.

There is no better time than during National Coin Week to study our coinage and learn about the people who created the coins that formed a great part of our nation’s history. And to teach these important lessons to the next generations of Americans who will also take pride in our coinage.

Join APMEX all throughout National Coin Week for history, interesting profiles and highlights of these great men and women and the coinage they designed. Enjoy the history and artistry of our beautiful American coinage. Celebrate the ANA’s 2022 National Coin Week with APMEX with our selection of over 20,000 rare coins and currency products, in stock and ready to ship, perfect for any beginner or numismatic enthusiast.